You are on this page, so most probably, you’ve got a leaking freeze plug. You must be thinking, what should I do now? Can it get repaired? What does the freeze plug repair cost? Don’t worry; I’ve got you. Keep reading, and you’ll know the answers to your questions.

Before getting into how you can repair your freeze plug, we will discuss some things. 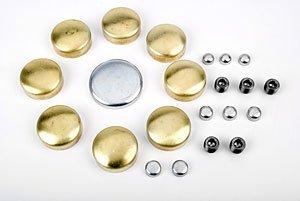 When should you get your freeze plug fixed?

In engines (vehicles), when the water freezes, it expands, and if you do not have an anti-freeze, the water that is being pumped through your car is getting prone to freezing; it can cause problems with your engine block if it were to freeze.

But if you have a high-quality freeze block installed, your engine will be preserved as the freeze plug prevents the engine block from cracking.

Now, coming to the question, when should you get your freeze plug a fix? As I told you, that water plug prevents the engine block from cracking when the water expands.

So, you meet these conditions? It means you should know how to repair your freeze plug and, most importantly, the repair cost of the plug.

How much does it cost to replace a freeze plug?

Before getting further, let’s talk about its repair cost. Usually, the repair cost estimates near $100 if you will replace it with a new one, but it may vary. You can also save the repair cost by resealing the freeze plug.

How can you repair a freeze plug?

So, you have a rusted freeze plug or a leaking freeze plug, and you want to repair it.

You can do that by yourself if you have the expertise and tools or let the mechanic do it.

Now, I’ll guide you to resealing the damaged freeze plug.

After some time, you will have to replace your automobile’s freeze plug as the sealant is not a permanent solution.

As you’ve applied the glue, you should do the next necessary steps, i.e., use a large screwdriver or pliers to hit the freeze plug until it’s popped out from its position.

You have to do it carefully if you are doing it yourself, leading to further damage.

Now you’ll have to clean the plug’s hole. You may have to get rid of your old sealant or any signs of corrosion like rust. Lack of patience in cleaning the plug’s gap can lead to future problems.

If you have decided to replace your freeze plug, then there are a few items you’ll need. These are

You’ll have to drain the antifreeze of your car, so it’ll not spill on the ground by removing the freeze plug. You can do it by loosening the radiator and allowing the petcock to drain.

Now you have to remove the parts which are blocking your way to the freeze plug. Depending upon your vehicle, the placement of features may vary.

You can break the freeze plug free by using a punch and a hammer. Simply put, a sharp point against the edge of your freeze plug and strike it with a hammer multiple times.

Make sure you don’t scratch your engine while doing this.

Now you should remove the damaged freeze plug by grabbing it with pliers. Angle the plug on the side before pulling it out if you are facing trouble in displacing it.

Make sure that you don’t push the pin into the block’s coolant.

Now, clean the gap thoroughly where your new freeze plug will fit.

Place the new freeze plug-in hole you just cleaned. To protect it, place a socket wrench of the same size as that of the pin.

Finally, you should set the vehicle’s parts now in the previous position.

Is it mandatory to hire a mechanic to repair the freeze plug?

It is recommended but not necessary. If you have the expertise and few tools like hammer, punch, degreaser, large socket set, you can do it yourself.

How do I know if my freeze plug needs resealing or replacement?

You can consult your mechanic for this kind of problem and get an estimate. You can do this without having spent any amount.

Can I rely on freeze plug resealing for the long-term?

No. It is a temporary solution. You can’t rely on that for the long-term, as it may result in cracking the engine block.

I think my freeze plug is broken. Is it okay not repairing it?

No, you can’t ignore it. It’s a severe problem, and it can result in engine damage as the antifreeze will not work correctly, and it can also crack your engine block.